We use cookies to understand how this site is used and to improve your user experience. By using this site, you consent to the use of cookies. For more information and to learn how to manage your cookie preferences, please see our Privacy Notice.

A NYSE Speed Bump You Weren't Aware Of

IEX is applying to become a registered stock exchange and we find ourselves at the center of a fierce debate over what is, and what is not, permissible in the operation of a U.S. stock exchange. The heart of the issue is the IEX "Speed Bump," a coil of fiber optic cable that slows down access to our market by 350 microseconds, which is one one-thousandth of the time it takes to blink your eye.

Our speed bump has two primary purposes. First, it protects client orders on IEX from being scalped at stale prices by certain high-speed traders who have purchased faster access to information from other exchanges, and know the prices to be stale. Second, it protects clients who use IEX's Router from being beaten to other exchanges by high-speed traders who are looking to react to the client's orders by removing liquidity on those exchanges before the orders can be executed.

IEX's detractors are trying to convince the Securities and Exchange Commission ("SEC") that IEX's speed bump will harm the entire U.S. stock market and that it gives IEX an unfair advantage. The irony is that over the past ten years, U.S. stock exchanges have invested huge sums of money creating two-tier markets - building and offering faster data and technology infrastructures at a price that only a small niche of traders can benefit from or afford, while at the same time continuing to offer slower products to everybody else.

Some of the existing exchanges might say such accusations are unfounded, with the justification that anyone who is willing to pay up can have access to the fast lane. However, the bigger questions remain: why offer both slow and fast access, and how transparent are the relative advantages/disadvantages of each?

Last year, IEX noticed that its ability to access displayed quotations (our "fill rate") on the New York Stock Exchange ("NYSE") had degraded to as low as 84% (meaning we were able to, on average, trade 84 shares out of every 100 shares that were quoted at the time we attempted to trade). On some days, 1 out of every 10 orders sent to NYSE missed ALL available liquidity. In contrast, IEX's fill rate averages 96.9% across all other U.S. exchanges. We found this especially curious given that our fill rate on Arca, an exchange owned by NYSE and located in the same data center, was 96.8%.

While consulting with NYSE, they advised we consider upgrading from the NYSE FIX gateway to their Binary gateway instead. One of the few public documents we found stated that the Binary gateway is a "new, faster protocol [which] reduces bandwidth and latency."1

After making the change, we noticed our fill rate on NYSE immediately improved to 97%, on average. The practical explanation: using NYSE's FIX offering is so much slower than Binary that market participants seeing IEX's Router trade on other exchanges were able to race ahead of our routing client and cancel or trade with quotes on NYSE through the faster Binary gateway before IEX's client order arrived through the slower FIX gateway. 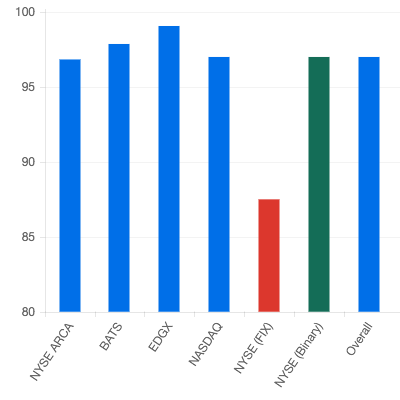 So why does this matter?

First, it offers more validation that "quote fading" or "latency arbitrage" at the microsecond level is real.

Second, by offering the faster binary access method, NYSE effectively imposed a "Speed Bump" on all of its participants who did not upgrade. They essentially slow down everyone else by offering a faster means of access that only a few have bothered to adopt given the amount of development work necessary to do so. We found very little documentation about this offering, and no public filings with the SEC.

Most interesting, the difference we found in the speed between NYSE FIX and Binary ranged from approximately 200 to 400 microseconds. And those microseconds translated into over a ten percentage point difference in fill rates! NYSE's speed bump was intentionally imposed on existing participants with very little disclosure, and without any review or approval by the SEC. All the while, NYSE continues to be a registered stock exchange with a protected quotation.

Moreover, this isn't just some temporary transitional system upgrade; NYSE has offered both means of access in parallel since 2011.

By comparison, IEX's speed bump is 350 microseconds and is equally applied to all our participants – there is only one lane. IEX has been fully transparent in our dealings with members and our filings with the SEC, but this transparency is being used against us as existing exchanges, including NYSE, are citing the speed bump as a reason to prevent IEX from having a protected quotation, the status that NYSE enjoys under its current fast lane/slow lane model.

Some would have you think that the debate over our exchange application is about rules, or even market structure philosophy, but it's not. What the debate is really about is commercial interests. IEX slows everyone down to make our market more fair. Other exchanges offer products with different access speeds: connection ports, co-location, and market data – charging a premium to the fast which enables them to make money trading against the slow. Manufacturing those kinds of trading "opportunities" creates market share and revenue for those exchanges.

If participants are provided the opportunity to choose the IEX exchange model, IEX can grow. If it grows, other exchanges will either lose market share or need to adopt similar investor protections themselves. Either way, the premium on pure speed goes down, and that will cost a select few players, including the exchanges themselves, a lot of money. Clearly those players have a very strong incentive to prevent IEX from ever becoming an exchange.

And who are those players? The answer is easy – just read the IEX comment letters.